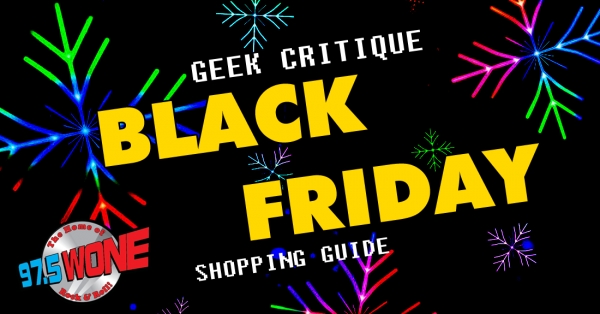 Holiday shopping season is upon us and I'm here to make sure you don't miss a deal! I've handpicked my favorite deals from all the major local Black Friday sales going on and listed them below. Whether your shopping for a video game fanatic or looking to make your home smarter, I've got you covered.

Prices on hottest video games this year are all over the map. It seems nowhere has them at the same price. Rather than listing the best deal on a game I've listed the prices at 4 major video game retailers in the area.  You may notice that GameStop is not listed as their Black Friday ad has not been posted yet (11/20). I will update soon as it's available. Some highlights below include Legend of Zelda: Breath of the Wild and Super Mario Odyssey both at $30 at Walmart and Target. Both games are must-own games for Nintendo Switch owners. For PS4 owners Shenmue 3 for $35 is a steal that just came out on 11/19. For Xbox One owners The Witcher 3: Complete Edition for $19.99 is a great price for one of the greatest games of this generation.

For the second year in a row, the Nintendo Switch is the system on everyone's list. Sadly, there is not much in the way of deals on the system due to the high demand. If Mario Kart 8 is already on your list $299.99 is a good price as you are essentially getting the game for free with the system. The problem is this model has been replaced by a new model with better battery life. It is unclear what version of the switch you will get with the Kohl's deal, but if you plan on doing shopping at Kohl's this holiday season getting $90 back in Kohl's cash is enticing.  The $199 Playstation 4 deal at Best Buy and Walmart is one of the better deals this holiday season. You get 3 amazing games included, though none of them very young child-friendly. Not to be outdone the Xbox One S deal at Best Buy and Walmart is also a great entry to the system if you want to stay digital-only on games (It does not have a disc drive). The Kohls Xbox One X price of $350 + $105 back in Kohls cash is by far the best value I've seen on the beefed-up Xbox One.

I've decided to only list the 4K TV's as the price on them has come down so much I would not recommend anyone getting 1080p TV.  There far too many TV deals to list them all, so I've decided to just highlight some really good deals in different price ranges. In the possible deal of all Black Friday deals both Walmart & Best Buys have 58" TV's for only $199.00. You can not go wrong with either TV at that price. If you wanted something a little more named brand there are several Samsung TV deals that are as cheap as I've ever seen them.

With the number of laptops advertised on Black Friday increasing each and every year, there is simply no other piece of electronics that has this level of competition. From $100 Chromebooks to fully loaded gaming laptops there is a little something for everyone. The clear winner in terms of value is the Dell Inspiron for $349.99 at Best Buy. With an SSD, 8GB of RAM, and a touchscreen, it has the specs usually reserved for high end and high priced laptops.

If you are in a market for a tablet it's hard to beat the value you get in the $30 Amazon Fire 7. In terms of value, nothing even comes close. The Fire 7 Kids Edition is a decent price also for peace of mind. If your child breaks this tablet at all in 2 years after purchase Amazon will replace it for free, no questions asked. If you wanted an iPad Walmart and Best Buy's $250 for the 10.2" iPad is a great value.

This category really comes down to what ecosystem you want your smart devices to live on, Google's or Amazon's. There are great prices all around on both sets of devices and just comes down to personal preference.

Tweet
Published in General
More in this category: « Cold Weather Resources Applications »
back to top