Rock Hall Nominees for The Class of 2020; My Take 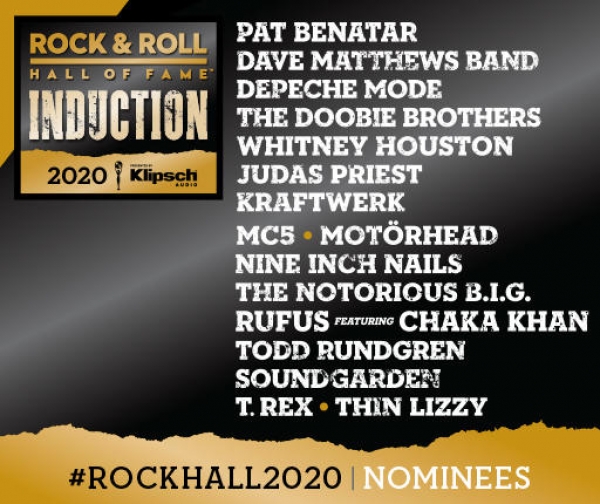 The Rock & Roll Hall of Fame released the nominees for induction into the Class of 2020. As usual, the list each year is met with similar reactions such as; "It' about time!" Or "Why not (insert band name here)?!" Or my favorite "That's not rock!" And in the case of say Whitney Houston I'd tend to agree but influence plays a factor, too. There's no denying she was a talented singer and that no doubt influenced many who came after her. Did you know Chrissie Hynde of The Pretenders was influenced by the likes of Karen Carpenter and Barbra Streisand. You make what you make of your own personal art but influence set that spark. Many would say Notorious B.I.G. is not rock but I'd argue that kids listening to his story-telling in the east coast rap genre defined what "rock" was to them. It's a feeling that can cross over many styles. It's a sense of freedom that thumbs its nose at authority or can tell a relatable story of the human condition while moving from adolescence to adulthood. Case in point "My Generation" or "Young Man Blues" by The Who. The list will always be diverse and fill a variety of demographic holes and let's face it, that's good for business and gets feet walking through the doors.

Each year when the list comes out, I look for the innovators and the influencers. I see the aforementioned Houston and B.I.G. as strong contenders. The same goes for Todd, T-Rex, MC5, (a 1960's era prototypical punk band from Michigan). I think Nine Inch Nails has the edge over Depeche Mode and Judas Priest over Motorhead. We'll see The Doobie Brothers before Thin Lizzy and Soundgarden before the Dave Mathews Band. As for Pat Benatar and Rufus featuring Chaka Kahn, I'm going with Pat and her husband Neil because hey, we like her and he's from Cleveland. Kraftwerk is a wild card. They have received the most previous nominations, having been on the Rock Hall ballot for induction five times previously. This could be their year.

All this is in my humble opinion of course and you may agree or disagree. That's cool. I'll be interested in seeing which five of the sixteen nominees will be chosen and who waits for another year. The good news is the Rock & Roll Hall of Fame invites you to voice your opinion in the fan vote. It doesn't count for everything but it does carry some weight so let them hear ya! Here's some other good news for the local economy, the inductions will be held at Cleveland's Public Hall on May 2nd, 2020.