The Beginning of a Great Adventure 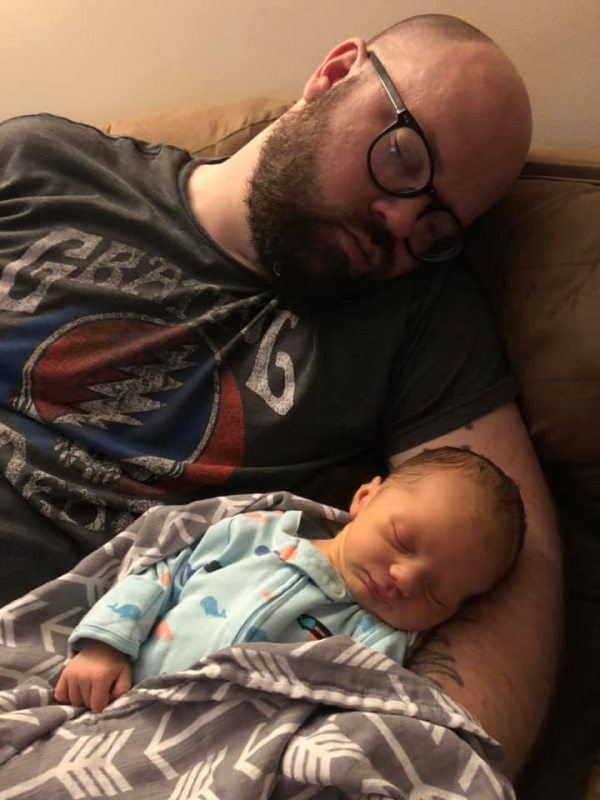 I guess you could say I kinda sorta knew what I was getting into when I met Megan and quickly realized that she was "the one."

Then some time down the road a bit she told me that she was pregnant, and through tears of joy and a complete whirlwind of emotions I thought, "What have I gotten myself into?" (as I'm sure many first-time fathers have themselves).

And now, as I hold the love of my life in my arms and he looks up at me with the most curious, innocent, lovely eyes I've ever seen, I think to myself, "Wow... I've never been more into anything in my life."

It hasn't been the easiest start to this life for Baby Ro, but a couple of weeks in and he's hitting his stride. He's lucky though, because he's got the best Mom he could ever hope for and two older siblings who love him to the moon and back. Oh, and not to mention three amazing grandparents who are already spoiling him, probably too much, but with nothing but love in their hearts.

As a new dad I've realized many things over the past couple of weeks. First, I've realized that this sweet child o' mine relies on me and his Mom for literally everything. There is nothing he can do without our help. I don't know if anyone else knows this, but that's a HUGE responsibility... (<-You were supposed to pick up on the sarcasm.)

Next, I've realized that my Dad was right... about everything. My Old Man always told me, "When you have kids of your own you'll understand." And now, I understand. There's nothing I wouldn't sacrifice for my Son. Not a thing. I choose him and I choose him every single day, no matter how I'm feeling about anything else.

Finally, I've realized that I've never loved anything more. And that goes not just for my Baby Boy, but also for Megan, my fiancee. Watching what she went through, including nearly nine months of an often not-so-easy preganancy and then 14-plus hours of labor, it has given me a whole new respect and appreciation for her and the sacrifice she's made. I'm talking about not going to a concert or maybe not buying myself those new shoes or that cool kayak (which I might still do actually... Haha). My sacrifice is of a more material and time... and sleep nature, while her's is a sacrifice of so much more. And the moment I first saw my Baby Boy and heard his little coo and held him in my arms... Well, that moment... I've never felt anything like the love I felt then. I go back to that moment often and I can still feel it. Every time I hold him and he's looking up at me I feel it. And there's nothing like it.

It's still surreal to me, now two weeks removed from Baby Ro's birth. While I knew he was coming I still can't believe he's here. Just before he was born, another great dad and a great friend of mine, our own Tim Daugherty shared a little Lou Reed with me and nothing has ever rung more true; this is, indeed, the Beginning of a Great Adventure...

More in this category: « Billy Gibbons Homage to Morrison, Richards, and More University of Akron to Host 9/11 Memorial Stair Climb »
back to top