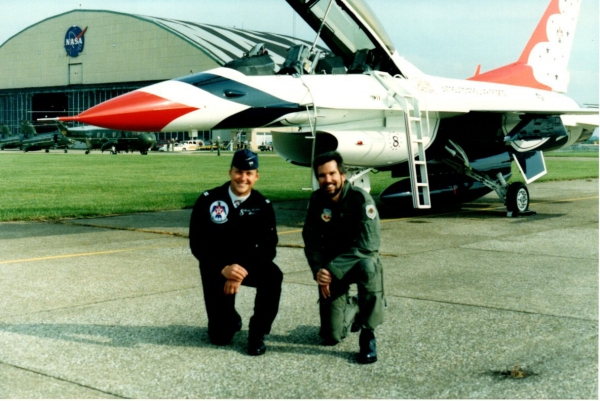 One year I had the honor to fly in an F-16 with the Air Force Thunderbirds.  They had asked all of the TV personalities in town and no one was brave enough to do it.

So they started to ask the radio personalities and only one wanted to fly with them...ME!  I couldn't wait.  We decided to brroadcast my entire show from the Glenn Research

Center at NASA where the Thunderbirds were based for the air show.  The Thunderbirds have been thrilling audiences since 1953 and they gave me the thrill of my life that

day.  It's all business.  I was fitted with a G-suit that fits over your legs and lower body.  It expands as the G forces increase and pushes the blood to your heart and head to

prevent you from passing out.  They also went over an escape plan if anything went wrong.  THAT really gets your attention.  When we took off the pilot said, "We're 150 feet off

the runway and we're going to hit the afterburners and go straight up."  We did and it was incredible.  We pulled 6 G's and I could feel myself being pushed deep into my seat.

At one point we pulled 9.3 G's.  I followed their instructions and didn't get sick.  When the crew chief opened the canopy, I told him I didn't get sick and he said, "Sir, you made

my day."  They made my year!  Look for them around 3pm each day this weekend at the Cleveland National Air Show and enjoy the show!

More in this category: « New Meaning to Mars Rock! How About a 3 Day Weekend Forever?!! »
back to top