Jeff Kinzbach in the Morning 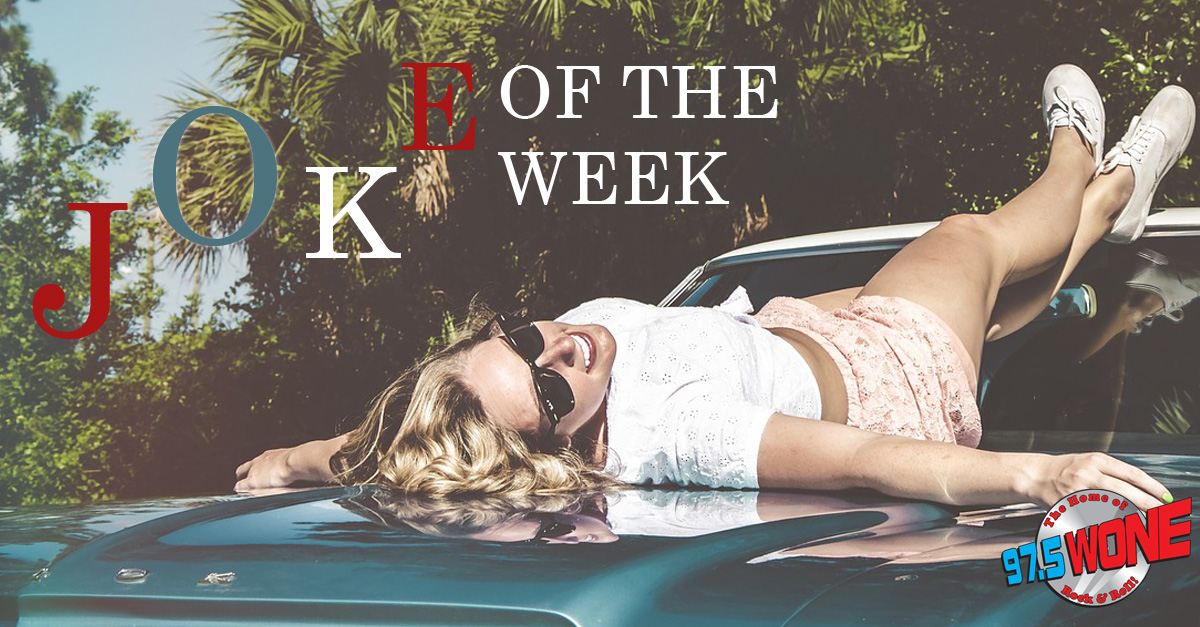 Joke of the Week winner Rebecca Connor hails from Barberton, and scores for The Works from Klaben Auto!

Three football fans die at the same time and go to heaven. A Bengal fan, a Ravens fan and a Steelers fan.

An angel greets them and tells them "There is good news, everyone here gets a car. The more faithful you were to your wife the better the car. You get your cars in a week."

A week goes by and the guys return to see what kind of cars they got.

The Bengals fan says that he was not the most faithful, cheated a lot and feels bad about it and received a Prius. The Ravens fan said, "I only cheated two times and regret it, and I got a Porsche".

The Steelers fan was crying, but finally responds, "I never cheated one time and got the top of the line Lamborghini".

The other guys say, "That’s great, so why are you upset?"

The Steelers fan says "My wife just died yesterday and I just saw her go by; she was pedaling a tricycle". 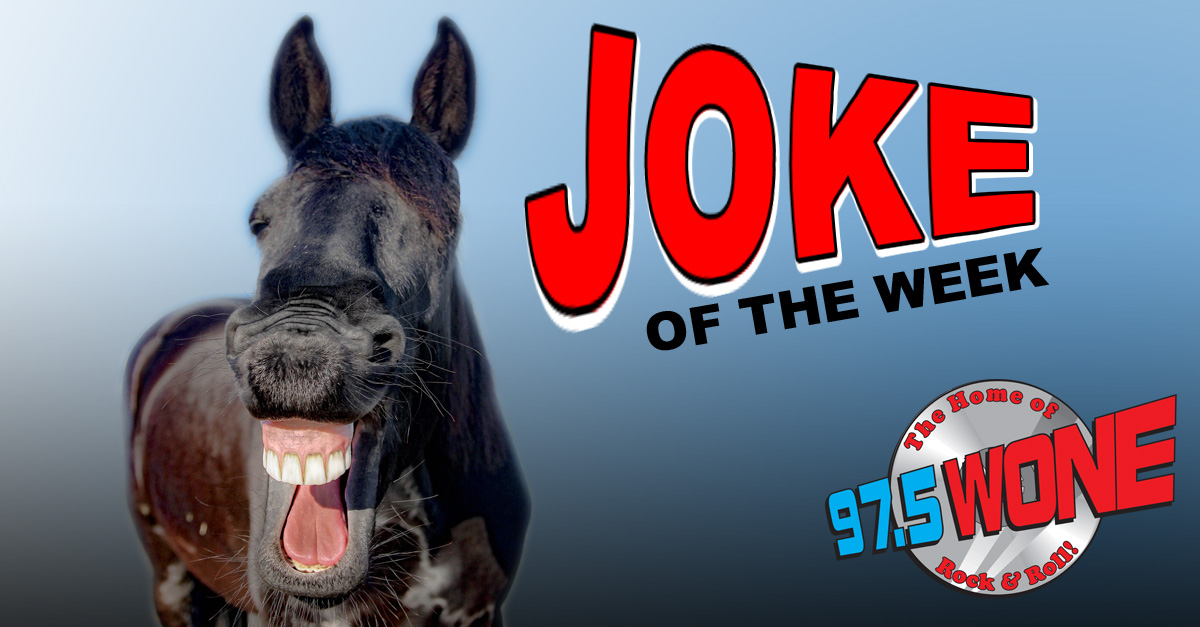 Heather didn't want us using her last name, even though we told her Steeler Jim doesn't read that far. She wins The Works from Klaben for this short sweet Joke of the Week!

Have you heard? Scientists have discovered the one sexual position that makes ugly kids! Just ask Steeler Jim’s Mom. 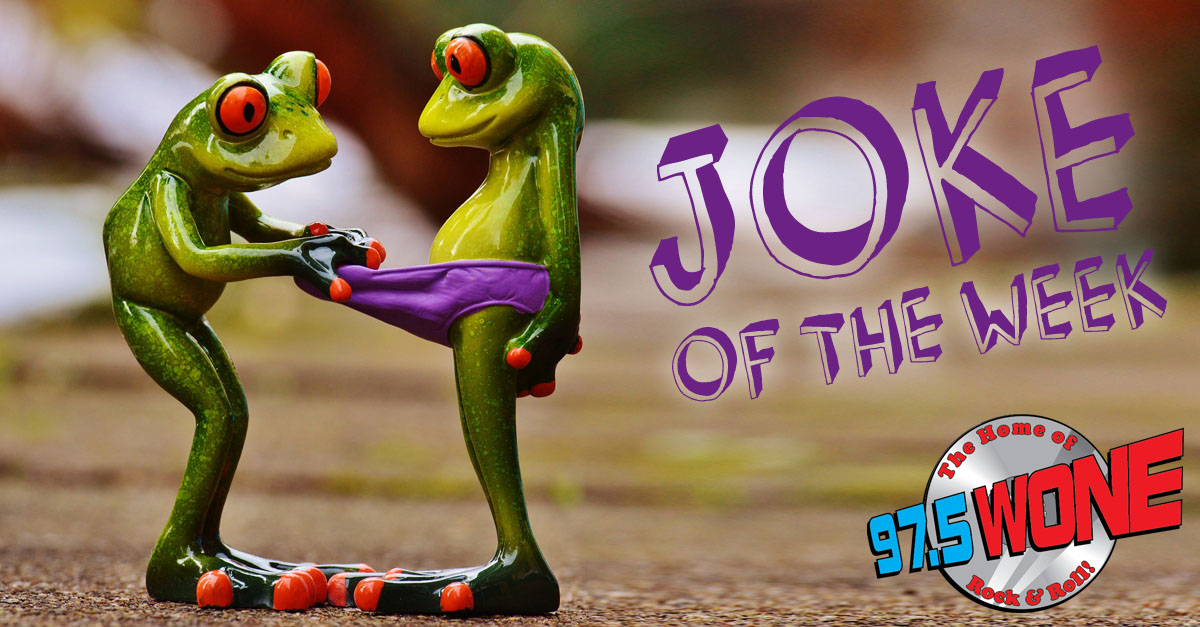 Congrats to John Gilbertson of Macedonia for contributing this Joke of the Week for The Works from Klaben!

A Texan walks into a pub in Cincinnati and clears his voice to the crowd of drinkers. He says, "I hear you are a bunch of hard drinkers. I'll give $500 American dollars to anybody in here who can drink 10 pints of Guinness back-to-back."

The room is quiet and no one takes up the Texan's offer; in fact, one woman leaves but returns about 15 minutes later. Then Bengal Betty taps the Texan on the shoulder. "Is your bet still good?"

The Texan says yes, and asks the bartender to line up 10 pints of Guinness. Immediately the Bengal Betty tears into all 10 of the pint glasses drinking them all back-to-back.

The other pub patrons cheer as the Texan sits in amazement. The Texan gives Betty the $500 and says, "If ya don't mind me askin', where did you go for that 30 minutes you were gone?"

Bengal Betty replies, "Oh ... I had to go to the bar down the street to see if I could do it first." 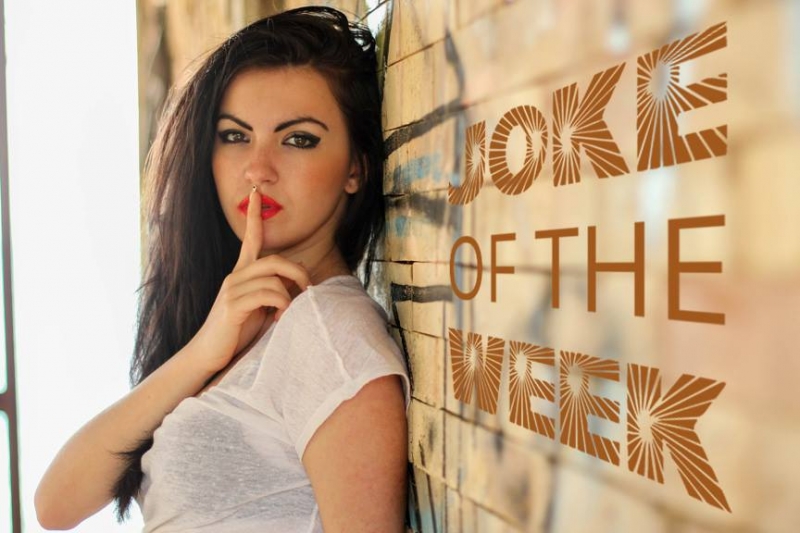 Tony from Orrville scores Joke of the Week with his lineup of Christmas one-liners -- and that's got Tony the Klaben Works!

- What did the kid with two broken arms and two broken legs get for Christmas? A skateboard!

- Why did the snowman have a big smile on his face? Because the snow blower was coming down the street.

- Why was Santa upset over the sweater he got for Christmas? Because he was hoping for a screamer or a moaner.

- As I was paying the cashier for my Christmas tree, he asked "Are you going to put that up yourself?" I replied "no, you sick dog. I'm putting it up in the living room."

Merry Christmas, and to all a ROCKIN' night! 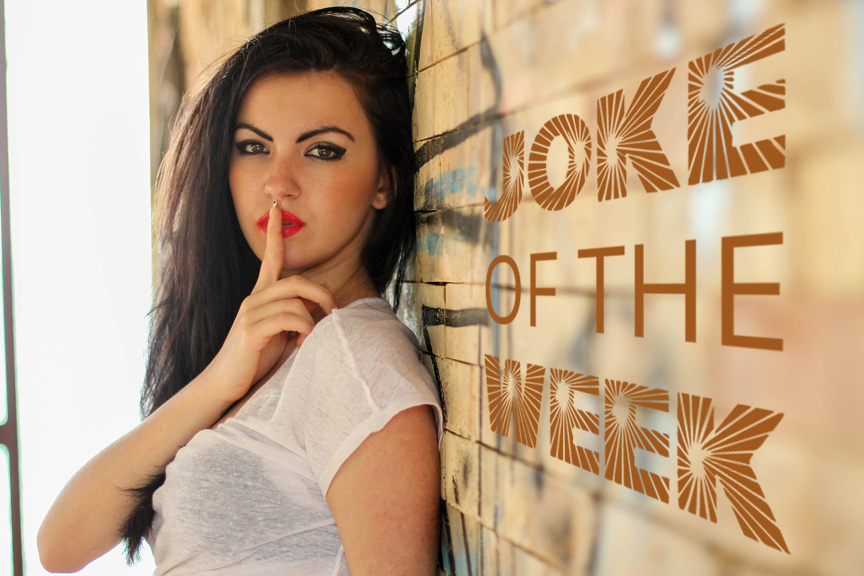 Barnyard humor for this Joke of the Week from Dan Creighton of Canton for The Works from Klaben:

Steeler Jim and his buddy were out deer hunting when they came across a Billy Goat with his horns caught in a fence. They walk up and check it out and sure enough, the goat was really stuck.

Jim's buddy winked "watch this" and walked over to the goat and starts slapping him on the butt. When he was done, Steeler Jim exclaimed "I want a turn!"

Go ahead, replies his buddy, so Steeler Jim went over and stuck his head in the fence. 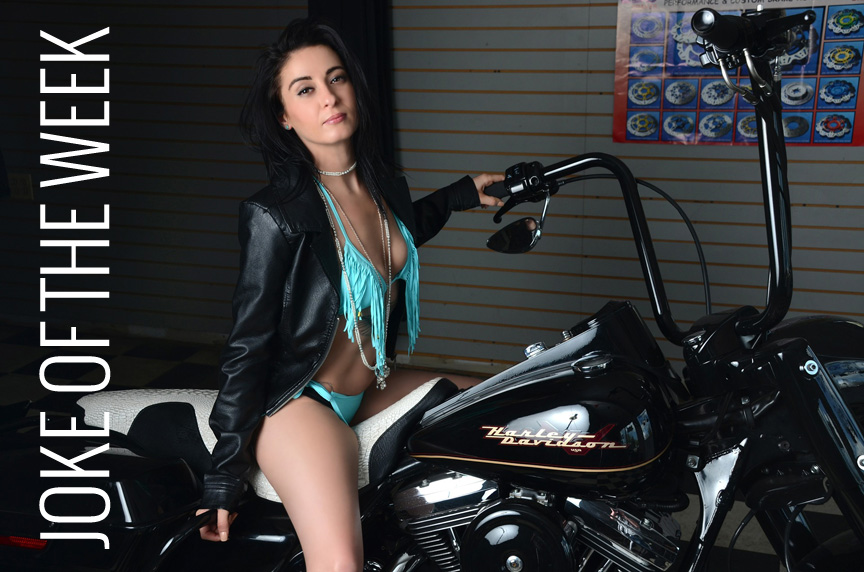 Joke of the Week comes from Trucker Dave of Northfield, at the expense of Steeler Jim. Dave scores The Works from Klaben for the one liner of the year.

- Because he likes Dick's. 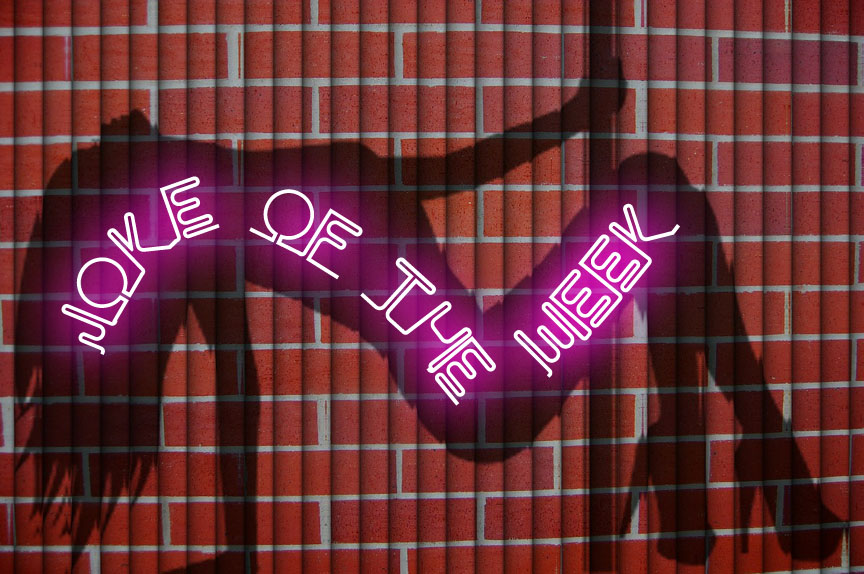 How 'BOUT Karla Burgess of Kent, snagging The Works from Klaben for this Joke of the Week!

Bengal Betty and Steeler Jim were in a local shopping center just before Christmas. Bengal Betty suddenly noticed that Steeler Jim was missing, and as they had a lot to do, she called him on his cell phone.

Bengal Betty asked "Jim, where are you? You know that we have lots to do!"

Steeler Jim said "Do you remember the jewelry store we went into about 10 years ago, and you fell in love with a diamond necklace? I couldn't afford it at the time, and I said that one day I would get it for you."

Little tears started to flow down Bengal Betty’s cheek, and she got all choked up. "Yes, I do remember that shop," she replied.

Well, said Steeler Jim…."I'm in the Hooters next to it." 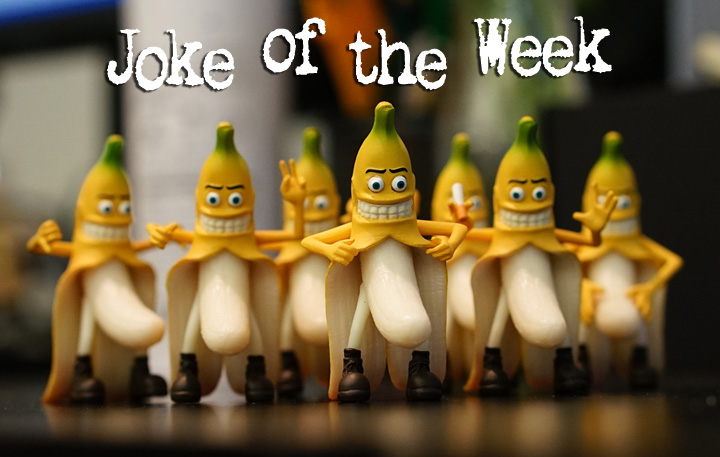 Going bananas over these #ichigan one liners from David Ard of Streetsboro who scores the Klaben Auto Works!

- Why wasn't Jesus born in Michigan? No wise men and no virgin!

- What do tornadoes and grads from Michigan have in common? They both end up in trailer parks.

- Why did the Post Office decide to abbreviate Michigan with an MI? Because it stands for "mostly idiots."

- How do you make University of Michigan cookies? Put them in a big bowl and beat for hours.

- Why are rectal thermometers banned at the University of Michigan? They cause too much brain damage.

- Why don't they breast feed their babies in Michigan? It hurts too much to boil a nipple.

Joke of the Week snared by Jamie DeMattia of Ravenna -- who picked up the Klaben Auto Works package! We've got another round of one liners...

Did you hear about the two nuts walking in the park? One was a salted.

What do blondes refer to a good looking man with a brunette as? A hostage.

Did you hear that McDonald's is coming out with cow lips? They are calling them McJaggers. 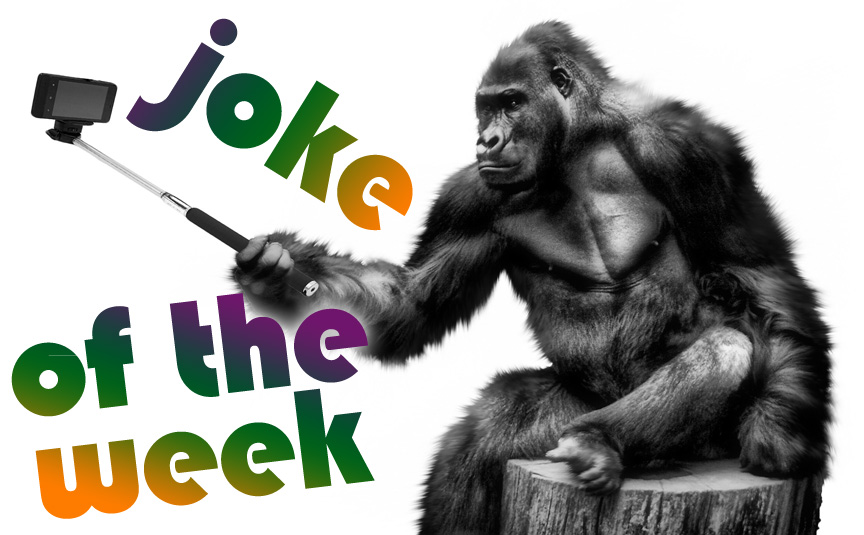 Becky from Firestone Park wisely wants her name left out, but she still nails the Works from Klaben!

- Alcohol is the perfect solvent: it dissolves marriages, families and careers;

- Relationships are a lot like algebra. Have you ever looked at your X and wondered Y?

- Steeler fans: their ass is always jealous of the crap that comes out of their mouths.

Q: What did Cinderella doe when she got to the ball?
A: She gagged.

Published in Joke of the Week
Read more...

Joke of the Week courtesy Doug Lehman of Dalton, who nails The Works from Klaben for these!

You Know You're Having a Bad Day When....

- your horn sticks on the freeway, and you're behind 50 bikers;
- your car, house payment and girlfriend are all three months late;
- you're out drinking and have to get sick, but you have lockjaw.

You know you're having a REALLY bad day when:

- In the middle of a rather uncomfortable prostate exam, your realize the doctor has BOTH hands on your shoulders.

Congrats to Ron from the Portage Lakes and he's snared The Works from Klaben Auto for Joke of the Week honors -- the boys in the morning especially loved the final one.

With the Indians fans bringing goats to Progressive Field to jinx the Cubs in the World Series, what do they call goats in Pittsburgh? - Women.

How are men like used cars? - Both are easy to get, cheap and unreliable.

Why are brides dressed in white? - Because it matches the kitchen appliances.

Why don't men get mad cow disease? - Because they're pigs.

What to the Chicago Cubs and Pee Wee Herman have in common? - They both can't whack it in public.

It's a ONE LINER FRIDAY and Becky from Tallmadge scores The Works from Klaben!

Heard about the man from Pittsburgh who was a bit "premature"? The doctor introduced him to a mate with a short attention span.

How is sex like air? It's no big thing unless you aren't getting any.

Hear about the man from Pittsburgh arrested for fooling around with a horse? In his defense he claimed it was a stable relationship.

How are husbands like lawn mowers? They're hard to get started, they emit noxious odors, and half the time they don't work.

How can you tell if your wife is dead? The sex is the same, but the dishes pile up.

How can you tell if your husband is dead? The sex is the same, but you get the remote.

Congrats to Mark Cunningham of Akron for the Joke of the Week, good enough for The Works from Klaben!

The coach had put together the perfect team for the Chicago Bears. The only thing that was missing was a good quarterback. He had scouted all the colleges and even the Canadian and European leagues, but he couldn't find a super athlete who could ensure a Super Bowl win.

Then one night, while watching CNN, he saw a war-zone scene with a young Iraqi soldier with a truly incredible arm. He threw a hand grenade straight into a 15th story window 100 yards away.

He threw another hand grenade 75 yards away, right into a chimney.

Then he threw another at a passing car going 90 mph.

"I've got to get this guy!” the coach said to himself. "He has the perfect arm!"

So, he brings him to the States and teaches him the great game of football. And the Bears go on to win the Super Bowl.

The young man is hailed as the great hero of football, and when the coach asks him what he wants, all the young man wants is to call his mother.

"I don't think you understand, Mother," the young man pleads. "I've won the greatest sporting event in the world. I'm here among thousands of my adoring fans."

"No! Let me tell you!" his mother retorts. "At this very moment, there are gunshots all around us. The neighborhood is a pile of rubble. Your two brothers were beaten within an inch of their lives last week, and I have to keep your sister in the house!" The old lady pauses, and then tearfully says,..........

"I will never forgive you for making us move to Chicago!"